Dungeons & Dragons Online (DDO) is a free to play online adaptation of classic role-playing game Dungeons & Dragons (D&D). Its strengths include its thousands of years of lore, the D&D setting, real-time action combat, and a strong emphasis on cooperative gameplay. As the name of the game implies, DDO offers a ton of dungeon-crawling fun with friends who must work together to complete a dungeon by exploring the place while avoiding traps, solving puzzles, defeating monsters, and, of course, getting sweet loot. 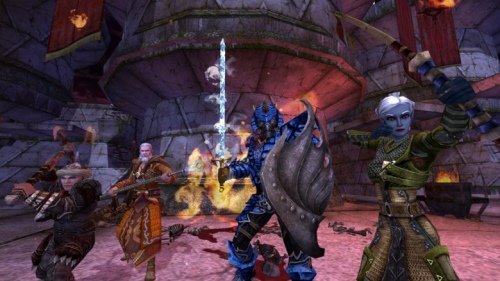 Lord of the Rings Online Review

Dungeons & Dragons Online is a game from the MMORPG genre that allows players to experience a 3D version of the Forgotten Realms in the D&D universe. There is an online store with micro-transactions for those who want additional features, but they are not a must for advancing in DDO. The game works on both types of machines, Windows and Macintosh and was developed by Turbine. The D&D 3.5 rule set applies and the Forgotten Realms and Eberon settings are: the continent of Xen’drik and the Kingdom of Cormyr.

DDO has public areas from which players can take quests, socialize, buy or sell. The instances of the game are different copies of the same dungeon and each of these copies is used by a player for his/her own purposes. There is a US version, from Turbine, which is also distributed by Atari in Australia and a European version, developed by Codemasters, with localized ramifications in three languages: German, English and French.

Every standard race is playable for free, with one exception: the Drow. There are also Premium races, which are available through a subscription, such as Half-elf, Half-orc, or Warforged. All the races that are currently available for players are the following: Humans, Dwarves, Elves, Warforged, Drow, Halflings, Half-elf and Half-orc. The number of classes is thirteen and they can be chosen for all races. 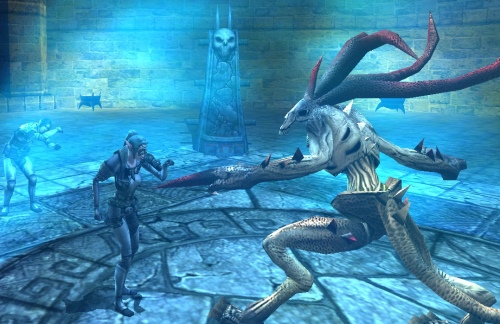 According to the path that players choose at the character creation screen, feats can be gained for every level. These feats provide more abilities and actions to the character. Skills can be used for obtaining bonuses and enhancements for improving feats and various abilities, for each class. The majority of feats can be found in all classes and there are special feats that are class-specific. Skills improve with every level and each skill is managed by an attribute, which can be either a bonus, or a penalty.

Enhancements are unique characteristics of DDO and they are used for advanced character customization. Every level has five tiers and for every tier completed, the player obtains one action point. The completion of tiers can be made by accumulating experience. With action points, enhancements can be bought.

In DDO, every quest has a base level. If this level is exceeded by party members, the amount of experience received as a reward can decrease. If the player has two levels less than the base level, the quest cannot be started. For receiving the reward, the player must talk to the quest giver. There are six difficulty levels for quests: Solo, Casual, Normal, Hard, Elite and Epic. The Epic level is not available for many quests.

A special feature in DDO is the existence of an audio narration for some quest chains in dungeons. In order to complete a full quest chain, there are situations in which the player may have to go in the same dungeon numerous times. Some quests can unlock features that otherwise are only available for purchase at the store.

The game is an action RPG and the gameplay in Dungeons & Dragons Online is focused more on group play. Other games made in the D&D universe encouraged players to fight more on their own. The view is third-person and players can adjust the camera with the mouse. A keyboard or a gamepad can be used for controlling the character in the game. Each key can be remapped, and there is also a toolbar displayed, that can be used for ability shortcuts.

The combat is fast paced, it has real time tactics and it is similar to the one usually found in action RPG games. Players can protect their companions from incoming arrows, or if they block the way for enemies in a narrow hallway. For avoiding arrows and spells, players can dodge and this can be done by stepping out of their way. Weapons can be used at anytime with a single click, but for hitting an opponent, players must get very close. In order to hit an enemy with an arrow, aiming and precision is needed. Enemy hits can be deflected with the aid of a shield.

Dungeons & Dragons Online is one of the few free to play Western MMORPGs around so for those who prefer Western settings and gaming over the numerous Asian MMOs available, DDO is a worthy choice. This is a very good option for those who enjoy RPG and cooperative gameplay. DDO is also well known for its lack of pay to win items in its cash shop since the best gear is found by adventuring in-game. However, extra character slots and premium content can be purchased using Turbine points which players can get by paying real life money or earning Favor by completing quests in DDO. It’s actually possible to play the game completely for free by unlocking all content through Favor which is a big plus for those who don’t want to spend too much. All in all, DDO is truly one of the best MMORPGs of 2014.