The Lord of the Rings Online is an exciting free to play MMO that puts players into Tolkien’s Middle Earth. With an incredible landscape, story driven quests, and exciting enemies, Lord of the Rings Online is a great experience for any MMO lover. While it is slowly getting swallowed up by the numerous new MMOs that are being released, it is still a fun game that deserves every player’s time.

Lord of the Rings Online Review

The game’s opening changes depending on which race the player chooses, so it opens up many different gameplay possibilities. The story of Lord of the Rings is what really drives this game home. For anyone that has read the books or seen the films, the game will absolutely not disappoint. In fact, the world of Middle Earth has never felt more alive than it does while players are actually roaming the lands that they have read about and meeting characters they have viewed on the big screen. Orcs roam the land and evil waits around every corner. It is up to the player’s hero to help save Middle Earth and the wonderful people that inhabit it.

The world of Lord of the Rings online is brought to life by the beautiful landscapes and towns. While the graphics are not the best, they are still perfect for the game and they certainly do not detract from the experience. The one main issue with the graphics and the sound is that compared to the newer titles that are available, they seem outdated. To some players, this may be a serious downside, but it does not affect gameplay in any way. When players walk through the cities of the land and the incredible landscapes in the game, it really sets the mood for the game and it sucks them in.

One of the greatest things about the graphics in this MMO is that they are versatile. For players that can handle it, they can have the graphics on high and enjoy the beautiful scenery around them, but for the players that have computer than cannot handle high end graphics, they can turn the settings on low and still enjoy the great gameplay.

As for the sound, everyone knows the intense emotion that the film soundtrack captures and the soundtrack for the game is no different. It once again sets the mood for the game and helps teleport the player into the exciting world of Middle Earth. It does Tolkien proud. 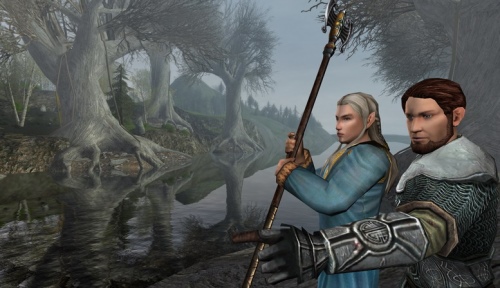 In the beginning of the game the player must first create a character before they embark on their epic journey. They will have the option of choosing a Human, Dwarf, Elf, or Hobbit.

The classes vary greatly and they each have specific attributes that make them ideal for different situations. It is always important for a player to think about their play style before choosing a class. For players that enjoy getting in close to the action, perhaps a Captain, Guardian, or Champion would be the best choice.

As for the looks of the hero, the customization seems to be a bit lacking. While each character gets to select a history and backstory, the physical details are chosen by choosing from a list of defaults. Still, there are numerous defaults so each player can tailor their character to their tastes. Overall, the customization and characters are definitely fun aspects of the game and MMO players are sure to enjoy them. 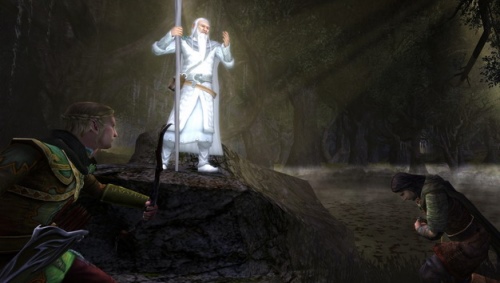 The gameplay and the quests in Lord of the Rings Online is very engaging and players will recognize many of the enemies that they face. It is always exciting when a large troll crashes onto the screen or a pack of orcs come into view. The actual quests can get repetitive at times, as the player will be fetching many items and dispatching numerous groups of various monsters.

For the most part, however, the quests are extremely enjoyable. The story quests are especially fun because of their epic feel and the great narrative that goes with them. Each quest has a Middle Earth feel to it, so players are constantly reminded that they are in the Tolkien universe. The difficulty of the quests varies as the player progresses, but this MMO is rarely ever challenging. This is great for the casual players, but the veterans may find this to be troublesome. Thankfully, if veteran MMO players want a challenge, there is always the PVP section of the game.

Another way the Lord of the Rings Online sucks players into the game is through player housing. By having homes available to players, it helps them dive deeper into their character and thus, deeper into Middle Earth. The houses are customizable and can be filled with numerous different items. It adds a great aspect to the game. The player homes are visible in the open world, so other players can visit one another and admire the houses they come across during their travels. In addition to that, players are able to store items in their homes, so it can be a great place to store valuables that are not need at the moment. 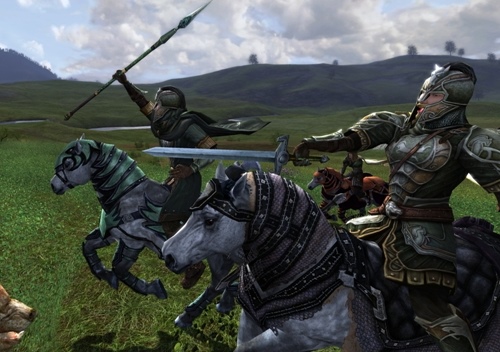 Lord of the Rings Online is a free to play game, but like all free to play games it has an in game store. To purchase things in the store a player must first buy Turbine points with real money. One unique feature that is utilized in Lord of the Rings Online is that players can earn Turbine points by actually playing the game. Players are able to earn these points at various times during the day by doing special missions or deeds. While they do not offer a lot at a time, with a little bit of patience and saving, players can end up getting new content for no money at all.

Many MMOs offer titles for characters and Lord of the Rings Online is no different. Titles are usually quite simple and are earned by doing various missions and deeds throughout the game. There are literally hundreds of titles in the game, so this can serve as a great activity for players to accomplish. It offers up new gameplay options, as well as bragging rights for the player that gets the most difficult title.

PVP is quite different in the Lord of the Rings Online. It is certainly not focused on, so this is great for players that want to relax and enjoy the story content. For players that look for PVP content in MMOs, they may be slightly disappointed. Everyone is one the same side in Lord of the Rings Online and this takes away the possibility of large open scale battles. There is also no open world PVP.

Still, the game does offer an option for the players that truly want to battle one another. This option is known as Monster Play and it is an exciting form of PVP. This unique form of PVP allows players to either use their own character or choose monster character that is already max level, regardless of whether or not the player’s character is max level. The players then battle one another to see who has the most skill, or who is the luckiest.

While it is not the greatest source of PVP out there, it does offer a unique option for players to experience. Monster Play is still exciting and extremely fun. Players can gather friends and duel one another in this mode for glory. Also, it is the only place where players get to experience what it is like to be an orc. Where else is that possible?

Lord of the Rings Online is truly an epic game that has a lot going for it. It has one of the best stories available and its history is certainly the most detailed. Any fan of the films or the books will enjoy traveling through Middle Earth as their favorite race, but players who are unfamiliar with the world will also enjoy the engaging gameplay. Because it is free to play, there is nothing to lose with this MMO. Everyone should give it a shot and because of the way the game is set up, players with almost any style of computer can experience Lord of the Rings Online.