The Secret World by Funcom is a pay to play (no subscription) 3D urban fantasy MMORPG with sandbox elements such as no classes or levels, crafting, and trading/player economy. This MMO is also notable for its “real world” setting, epic story quests, cut scenes, voice acting, and puzzles. 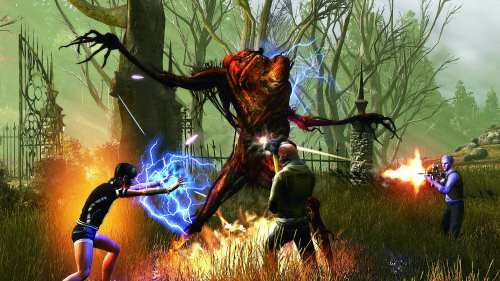 These days most developers simply go for a good themepark game. They figure that they can just create the same old type of MMORPG, give it good graphics, polish it up, make it free to play and, voila! A new hit MMO is born.

Funcom, on the other hand, looked at the MMO genre and really thought hard about what they could offer in terms of innovative gameplay. The Secret World is not your usual MMORPG.

No levels, no classes – unlike other MMORPGs, TSW has freeform character customization that allows players create exactly the type of character they want to play with no class or levels constraints. All of the abilities in the game are yours to choose whenever you want to learn them although only 16 of them can be active at any time. Players can mix and match every type of weapon or magic ability they want with no restrictions.

Setting – most MMOs are set in fantasy or futuristic, science fictional worlds. TSW, on the other hand, is set in our world, including recognizable locations such as London, New York, Seoul, Egypt, etc. Of course, it’s not exactly like out world. In TSW every conspiracy theory, urban legend, myth, and fable is true. It’s a world in which the Bogeyman feeds on the fears of children while vampires, werewolves, mummies, and other monsters are real.

Factions – since ancient times three secret societies (Dragon, Illuminati and Templar) have been working behind the scenes to control the rising darkness. Players must join one faction. In PvE players of all factions can work together but in PvP they fight against each other. The factions make for great storytelling, with shadowy puppet masters secretly controlling the rise and fall of empires.

Missions – this is one of the things that truly make The Secret World an innovative, fun game. There is an overarching story quest with lots of cut scenes and wonderful voice acting plus dungeon and main missions.

Main missions are divided into three categories: action, sabotage, and investigation. Action is your usual “kill things” type of quests found in other games while sabotage missions involve stealth actions like sneaking past enemies without being seen, wearing a disguise, hacking computer networks, etc.

Investigation missions are what TSW is somewhat famous for. These missions require you to think and even do some research. In contrast to most quests that tell you exactly where to go, what to do, and how to do it, investigation missions only give players clues which they then have to figure out on their own. Many clues are not meant to be taken literally or might be red herrings (misleading). Often, you have to use the in-game browser to research on some facts.

For example, to find a hidden location you are given the following clue:

“Time is the province of Kings and Gods. The hands of time point to truths written by kings in the words of God. The path is open to the enlightened.”

Spoiler: To solve this requires a lot of thinking. The word time gives you a hint – look at the clock which is at 10:10. The phrase “words of God” could refer to the Bible while “written by Kings” might be Kings I or Kings II. So your task would be too look up Kings I or II, passage 10:10 in the Bible using the in-game browser.

Kinda wacky, right? What other MMORPG would make you think so much and even look things up on the internet just to figure out a clue? The Secret World really takes its investigations seriously.

Right now you can buy The Secret World for less than $30 at their official website. That’s a great bargain because there is no subscription needed for TSW. This is a good game for social players who want something different from the usual medieval fantasy RPGs. Fans of urban fantasy or horror will enjoy TSW because it is just dripping with atmosphere. Gameplay is also unusual but if you liked what you read in this review then you should give it a try.

4 thoughts on “The Secret World Review”